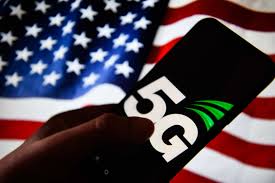 (Natural News) In an effort to get the economy going without having to return Americans' tax dollars directly back to them in the form of more stimulus checks, the Trump administration is reportedly putting together a $1 trillion infrastructure proposal that includes billions of dollars allocated for the 5G rollout.

While this massive economic kickstart would focus largely on roads and bridges, many of which are in dire, third-world shape, 5G wireless infrastructure and rural broadband is also a major component, according to people familiar with the plan.

For years, Trump has promised to jumpstart infrastructure, though he has had little to show for it thus far. But now it could finally become a reality thanks to broad public support.

The 5G portion of Trump's plan has many critics of the technology concerned that the president is not paying any attention to its health risks. His only focus seems to be on keeping up with the rest of the world and making sure the dollars keep on flowing.

Reports indicate that a fairly sizeable chunk of Trump's $1 trillion infrastructure plan could end up going to tech companies like Ciena, CommScope, Ericsson, and Nokia, all of which build products for 5G technology.

There is also likely to be a boost in spending from the nation's top wireless companies, which will be able to roll out new 5G devices that run on the new 5G networks.

Does Trump care about Americans' health?

Trump's constant emphasis on the economy might be good for Americans' pocketbooks, but will it be good for their health? The risks associated with 5G exposure are well-documented, and yet Trump has utterly failed to address any of them as he pushes to expand 5G coverage.

As you may recall, Trump's Department of Justice gave its blessing to the long-proposed merger between Sprint and T-Mobile, which will reduce America's major wireless company lineup to a mere three.

Merging Sprint and T-Mobile together will also result in a new leading wireless carrier, the nation's largest, exacerbating antitrust concerns. And when you add Dish into the mix, which has been tasked with building out the 5G network for this new mega-carrier, the situation is even more dire from a competition perspective.

Another problem is that most of the 5G patents in existence are owned by Huawei, the Chinese firm that the Trump administration has promised to eliminate from the wireless supply chain due to the security risks involved.