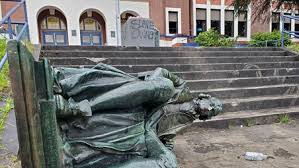 He dreamed of converting his country into an agrarian socialist society he believed would evolve into a communist society. In order to realize that objective, millions were forced to toil in the countryside. "Bad elements" and "New People"—intellectuals, government officials, Buddhists, shopkeepers, disfavored ethnicities—were either worked to death in rural collectives or executed outright.

Between 1975 and 1979, it is estimated between 1.5 and 2 million people—nearly a quarter of the population—lost their lives. The Khmer Rouge made Maximilien Robespierre and the Committee of Public Safety during the French Revolution look like amateurs by way of comparison.

Pol Pot and the Khmer Rouge called their terror campaign waged against civilization "Year Zero," the idea that culture, heritage, religion, and history must be utterly destroyed to make way for a communist vanguard and the implementation of revolutionary culture. In China and Russia, similar revolutions resulted in the death of around 100 million people. The Nazis came in a distant second—they murdered a paltry 16 million people.

Fast-forward to 2020. The founder of Black Lives Matter proudly admits she is a "trained" Marxist.

Their goals are more about attaining political power and money than protecting minorities and improving society. Their organizational goals might be quite different from the goals of the protesters concerned about police brutality and discrimination.

Lenin wrote, "When it comes time to hang the capitalists, they will vie with each other for the rope contract." This is certainly the case now as transnational corporations jump on the George Floyd bandwagon. The Ford Foundation (CIA), Amazon, Citibank, Facebook, Apple, YouTube, and many other large corporations are underwriting the effort to take down America under the banner of "social justice" and the destruction of capitalism.

BLM and Antifa are now involved in the sabotage and dismantling of American history and culture. "At its core, BLM is a revolutionary Marxist ideology," writes Andy Ngo, a journalist attacked and beaten by Antifa goons in Portland. "The US is getting a small preview of the anarchy Antifa has been agitating, training and preparing for. Ending law enforcement is a pre-condition for Antifa and BLM's success in monopolizing violence."

Pulling down statues of Confederate generals and former presidents is only the beginning. The BLM-Antifa Marxists are more attuned to Herbert Marcuse than Lenin or Trotsky.