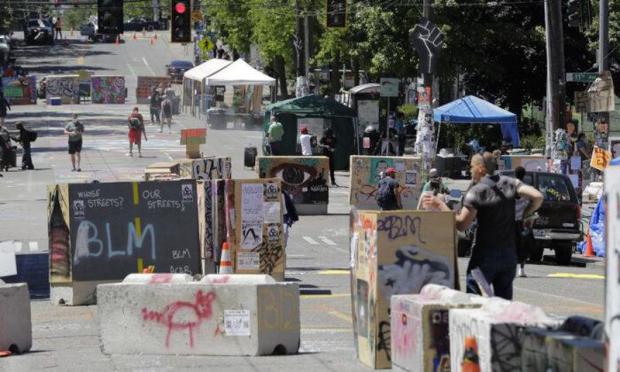 As AP reports, Mayor Jenny Durkan said at a news conference that the violence was distracting from changes sought by thousands of peaceful protesters seeking to address racial inequity and police brutality. She said the city is working with the community to bring the "Capitol Hill Occupied Protest" zone to an end.

"The cumulative impacts of the gatherings and protests and the nighttime atmosphere and violence has led to increasingly difficult circumstances for our businesses and residents," Durkan said.

"The impacts have increased and the safety has decreased."

As JustTheNews.com's John Solomon notes, the announcement was a remarkable turnabout for a Democratic mayor who received significant criticism for allowing rioters and protesters to take control of the neighborhood two weeks ago and then suggesting on CNN that the CHOP might become the epicenter of a long "summer of love."

"After days of peaceful demonstrations, two nights of shootings have clearly escalated the situation on Capitol Hill," Durkan's office said in a statement.

"We have been meeting with residents and small business owners to address their safety and disorder concerns, including the ability of first responders to access emergencies in the area...

As many community groups are also urging, (the) Mayor believes individuals can and should peacefully demonstrate, but the message cannot be lost in the violence."