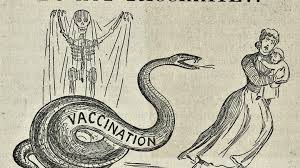 The dewy chill over Leicester, England, in March 1885 did not deter thousands of protesters from gathering outside nearby York Castle to protest the imprisonment of seven activists. Organizers claimed as many as 100,000 people attended, although historians estimate it was closer to 20,000.

The cause they rallied against? Vaccination.

This movement has faded from popular memory, obscured by the controversy of more recent anti-vaccination efforts, which gained momentum in the 1990s. However, the effects of the Victorian anti-vaccination movement still echo in the debate over the personal belief exemption, which was banned in California in June.

On the day the Leicester protesters gathered, vaccination was mandatory in England. Nearly a century before, Edward Jenner, a Scottish physician, had invented a method of protecting people against the raging threat of smallpox. The treatment was called variolation, and it involved voluntary infection with a similar disease. Patients were given cowpox to protect them against the much deadlier smallpox, much the way parents long exposed their children to chicken pox to protect them from getting sicker from the illness later in life. (Today pediatricians recommend the chicken pox vaccine instead.)

After germ theory was expanded upon and researchers developed vaccines, the British government outlawed variolation, which still carried some risk of killing the person it was meant to protect, in the Vaccination Act of 1840. Safer vaccines, which contain a weakened form of a particular disease, replaced variolation, which was a controlled exposure to a disease by injecting a healthy person with some of the infected pus or fluid of an ill person. To encourage widespread vaccination, the law made it compulsory for infants during their first three months of life and then extended the age to children up to 14 years old in 1867, imposing fines on those who did not comply. At first, many local authorities did not enforce the fines, but by 1871, the law was changed to punish officials if they did not enforce the requirement. The working class was outraged at the imposition of fines. Activists raised an outcry, claiming the government was infringing on citizens' private affairs and decisions.

Over the course of a decade, multiple prominent scientists threw their support behind the anti-vaccination movement as well.