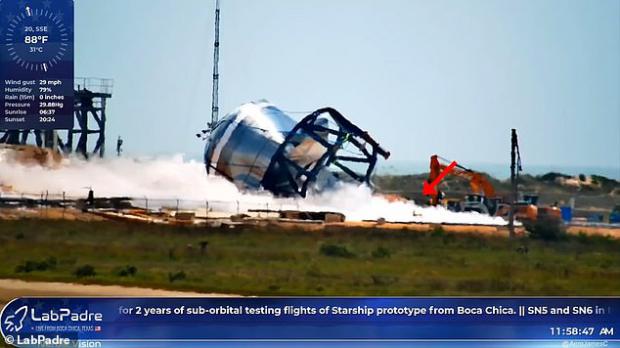 Footage has emerged of one of Boston Dynamics' robotic dogs patrolling a SpaceX test site in the US.

The video allegedly shows SpaceX using the $75,000 (£60,000) robotic dog to inspect the aftermath of its test site in Boca Chica, Texas.

SpaceX had just been conducting a cryogenic pressure test on the Starship SN7 dome tank prototype, according to Tesmanian.

SN7 was filled with sub-cooled liquid nitrogen and it was intentionally pressurised to its capacity before it burst and collapsed on its side.

The stainless-steel commercial spacecraft, once operational, will be capable of transporting passengers on long-duration voyages to the Moon and Mars.

But until the launch vehicle is ready, Elon Musk's company appears to be employing a little help from a trusty robotic companion.

In footage captured by Texas-based YouTuber LabPadre, the Boston Dynamics dog can be seen trotting through thick clouds of nitrogen next to the wreckage.

Leaked pictures also supposedly show a bright red dog house for the robot dog to sleep in, showing it has been rechristened 'Zeus' by Musk's firm.