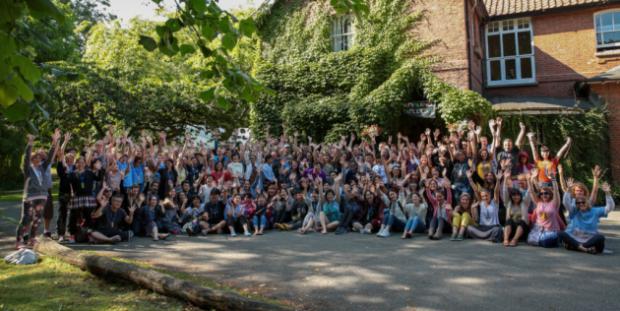 Neill's school "helped to pioneer the 'free school' philosophy," writes Aeon, "in which lessons are never mandatory and nearly every aspect of student life can be put to a vote." His methods "and a rising countercultural movement inspired similar institutions to open around the world." When Neill first published his book, however, he was very much on the defensive, against "an increasing reaction against progressive education," psychologist Erich Fromm wrote in the book's foreword.

At the extreme end of this backlash Fromm situates "the remarkable success in teaching achieved in the Soviet Union," where "the old-fashioned methods of authoritarianism are applied in full strength." Fromm defended experiments like Neill's, despite their "often disappointing" results, as a natural outgrowth of the Enlightenment.

During the eighteenth century, the ideas of freedom, democracy, and self-determination were proclaimed by progressive thinkers; and by the first half of the 1900's these ideas came to fruition in the field of education. The basic principle of such self-determination was the replacement of authority by freedom, to teach the child without the use of force by appealing to his curiosity and spontaneous needs, and thus to get him interested in the world around him. This attitude marked the beginning of progressive education and was an important step in human development.

Scared For School: 4 In 5 Parents Considering Homeschooling Kids This Fall