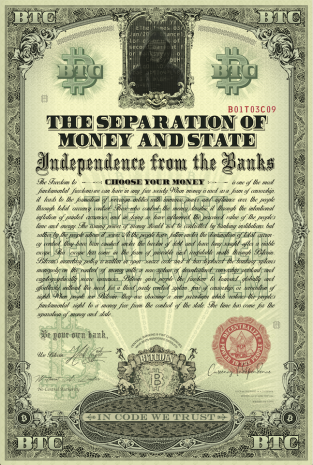 After the last thirteen weeks of Covid-19 lockdowns, business shutdowns, and police brutality, the lack of liberty and freedoms in the U.S. has never been more apparent. With ideas like bitcoin and concepts that bolster secession, the day is coming when money is completely removed from the state, just as the state was separated from the church centuries ago.

Roughly six days prior to the empty holiday, as I read the letters of Independence pronouncement adopted in Philadelphia, Pennsylvania, on July 4, 1776, I say to myself "Americans are not free." The majority in the United States have surrendered their freedoms and civil liberties to the collective mob. Many individualists are quite certain that most Americans don't believe in those declarations of independence, and the 27 grievances against tyranny written hundreds of years ago.

One reason that validates this opinion as truth, is because the U.S. government has transgressed upon the citizenry. They have quite literally violated every one of the 27 grievances. Yet the majority of U.S. citizens are too comfortable and too lost in the sea of distraction to even notice.