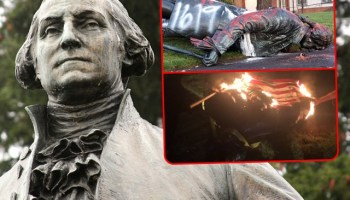 New York City's famous George Washington Monument in Washington Square Park was defaced with red paint on Monday as protesters gathered further downtown outside City Hall ahead of a controversial vote that could slash the city's police budget by $1billion - 16 percent of its total - despite escalating crime and chaos.

In the latest symbol of police defiance and unruliness across the city, the vandals tossed red paint at the famous George Washington monument on Monday then fled the scene, leaving city workers to try to power wash it off.

President Trump tweeted on Tuesday: 'We are tracking down the two Anarchists who threw paint on the magnificent George Washington Statue in Manhattan. We have them on tape. They will be prosecuted and face 10 years in Prison based on the Monuments and Statues Act. Turn yourselves in now!'

At City Hall, protesters who have set up an Occupy City Hall camp clashed with police on Tuesday morning. The protesters have been there now for a week and are refusing to leave until the NYPD budget is cut by at least $1billion - something that is likely to happen on Tuesday.

Mayor Bill de Blasio has reached an agreement with the city council that divests $1billion from the NYPD and cancels the hiring of 1,163 cops. Some Democrats say it is a step in the right direction and that the police force - like others across the country - needs to be stripped of its power and resources to combat systemic racism and excessive use of force.

However others say it's not enough of a hit to the mammoth force which enjoys a $6billion yearly budget. They want more money to be taken away, and say that much of De Blasio's plan amounts to 'gimmicks'.