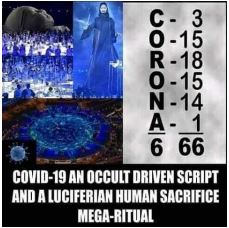 GOD is revealing TRUTH, don't miss it.  YOUR LIFE and YOUR CHILDREN'S LIVES DEPEND ON IT!   I am so excited to see how GOD is speaking to so many of us, the same message, but different parts.  I have to tell you there is so much information coming forward that NO ONE can keep up with it.  I know that since GOD told me to leave my job, because of what was coming, I have done nothing all day and night, every day, 24/7 but work on this website and the owner's website.  Of course I do stop to eat now and then, sleep a little when my eyes or body give out.  I have gone shopping a few times.  I stop to clean the kitchen when we just run out of dishes.  Other than that, I am on here.  It is impossible for one person even to cover one part of what is happening completely.  There is just too much.

I am pleased to find that others are posting on the OCCULT RITUALS connected with Masks.   I have not even had time to look at the other aspects of this, like the lockdowns and the hand washing.  Though I was aware they were also ritualistic.  So here I am going to share the work of some brothers and sisters.  I pray that you receive the truth with open hearts and minds.  We are fighting for our lives not only in this world, but the world to come.  WAKE UP!  Take up your position and join the battle.

So are the owners of many of our country's largest businesses and sports franchises.  (See here and here.)

And quite frankly, many Christian churches have been infiltrated by practitioners of Kabbalah, which is a book of Jewish mysticism, magick spells, enchantments, man-made numerology and other esoteric and occult practices that the orthodox rabbis use in the course of their daily lives, and now teach Christian leaders to use, as well. (See here.)

So, with so many of the world's "top tier" leaders pushing occultism – including those enemies of Christ who run the four hidden dynasties of politics, education, economics and religion— it should come as no surprise to you that the entire global coronavirus crisis is replete with occult symbology and ritual occult initiation themes.

Indeed, as you'll see throughout the rest of this commentary, the entire manufactured coronavirus crisis is one giant, occult ritual from start to finish, divided up into four mini-rituals, each with the distinct occult purpose of initiation and transformation of the world and its people into a new global order.

So, let's start by examining the four distinct, but interrelated, occult rituals that make up this massive global occult ritual initiation ceremony:

In the course of examining these four occult rituals, I'll do my best to explain to you how each one is part of an elaborate stage play designed to symbolically initiate the people of this world into their new positions in a new global order – a new order that rejects Jesus Christ and Christianity, and puts the people of this world under the ultimate control of a global elite whose god is the devil himself.

The Ritual Wearing of the Mask

Have you ever wondered why, in Revelation 17:5, Babylon is called "Mystery, Babylon"?

You already know that the word "Babylon" means "confusion."  But what does the word "mystery" mean?  Here's what the Strong's Concordance tells us:

G3466 Musterion — From a derivative of muo (to shut the mouth); a secret or "mystery" (through the idea of silence imposed by initiation into religious rites)— mystery.

Don't overlook that.  The word "mystery" in the Bible has to do with shutting the mouth as one undergoes a secret religious initiation.  Again, it's: "the idea of silence, imposed by initiationinto religious rites."

After all, at this point in time, 30 countries, including the United States, are now forcing their citizens to wear face masks over their mouths on a mandatory basis, ostensibly to help stop coronavirus infections.

This, even though numerous medical experts, including the Surgeon General of the United States, have openly stated that wearing masks has no beneficial effect whatsoever against coronavirus.

What's more, numerous medical experts have attested to the fact that face masks can even be dangerous to one's health in that they curtail clear thinking (and even consciousness)by trapping carbon dioxide in the chamber of the mask, forcing you to re-breathe it over and over, thus depleting your blood of fresh air and the life-giving oxygen component it contains.

So why are the powers-that-be, globally, forcing their citizens to wear these face masks, if the masks simply don't work against coronavirus, and might very well be dangerous to your health?  The answer might surprise you:

Among other things, the wearing of the mask over one's mouth is a token of submission…a gesture of your willingness to be subject to others who are not your usual Sovereign.

But there's more.  According to the Encyclopedia Britannica, mask-wearing is:

"A form of disguise or concealment usually worn over or in front of the face to hide the identity of a person and by its own features to establish another being."

In other words, the wearing of a mask represents an occult transformation— a human alchemy, if you will — from one role to another.  From one manner of being, to another.  Indeed, in this case, from individual sovereign under God to collective subject under the children of the devil.

You see, the masking ritual is specifically designed to reverse the order of hierarchy set in place by GodHimself.  In the hierarchy of your heavenly Father, you are a sovereign representative of His Word on this earth.  And your job is to speak His Word, on His Sovereign behalf to others.

In other words, He's the King, you're a Prince of His kingdom, and your job is to carry His Word to others, so they too can get on board with it and return to the Father eternally, through Jesus Christ.  As it's written regarding our primary duty as Christians:

II Timothy 4:2 — Preach the word; be instant in season, out of  season;   reprove, rebuke, exhort with all long suffering and doctrine.

In short, your job is to teach your Father's Word.  And you must be ready and willing to do so at all times (i.e., "be instant, in season and out of season").

As such, you must always remain unmasked, because your job — in your earthly role as one of His faithful representatives — is to speak and explain His Word to others.  And to do so, you must open your mouth.  You cannot be muzzled.  You cannot be masked.

Don't Do Your Own Research!!! – #PropagandaWatch