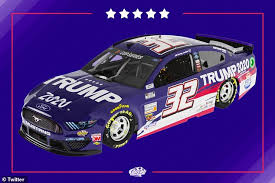 Corey LaJoie, 28, will take to the tracks Sunday in a newly painted Ford Mustang with 'Trump 2020' splashed across the hood and rear-quarter panels

The team pledged its support for Donald Trump's reelection campaign

Bubba Wallace, who will go head to head with LaJoie Sunday, debuted a Black Lives Matter design on his car at Martinsville Speedway in Virginia in early June

Wallace, 26, the only black NASCAR driver, had only two weeks earlier led calls for the Confederate flag to be banned from NASCAR venues and races