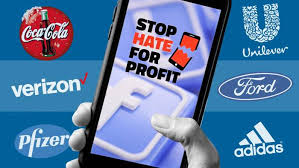 Advertisements for more than 400 brands including Coca-Cola, Starbucks and Pepsi are due to disappear from Facebook on Wednesday

Facebook executives held at least two meetings with advertisers on Tuesday, the eve of the planned one-month boycott

But the executives offered no new details on how they would tackle hate speech, the sources said and the parties involved were left frustrated

Now, CEO Mark Zuckerberg has agreed to meet with the organizers of the boycott, a spokeswoman said late Tuesday

The boycott has continued to gather momentum since June 17, when the group wrote an open letter calling for advertisers to withdraw from Facebook

On Wednesday, toymaker Lego became the latest brand to pause its ad spending on social media, confirming it would be halting all online campaigns

The Clorox Company, which also includes the brands Hidden Valley Ranch and Brita, also said it would be boycotting all online ads