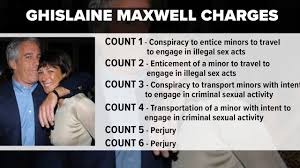 "We will be seeking detention," Acting U.S. Attorney Audrey Strauss in Manhattan said in a press conference announcing charges. Prosecutors said Maxwell helped Epstein entice girls as young as 14 into sex from 1994 through 1997, then lied about it under oath in 2016.

As Bloomberg adds, unless the judge in New Hampshire releases her on bail, "Maxwell will either be held overnight in a local jail there or transported immediately back to New York, said Jack Donson, a consultant who formerly worked for the federal Bureau of Prisons. In New York, she would likely be transferred to one of two federal lockups, the Metropolitan Correctional Center in Lower Manhattan or the Metropolitan Detention Center in Brooklyn."

Of course, Manhattan's MCC is where Epstein was found dead in his cell in August after committing "suicide" by hanging himself using his bed sheets. How he was permitted to do so remains a mystery. Two MCC guards are facing charges for falsifying records and failing to check on inmates in the hours before Epstein's death. Both have pleaded not guilty. In May, the Manhattan jail also faced criticism after a judge-ordered inspection found it was failing to adequately protect inmates from the coronavirus.