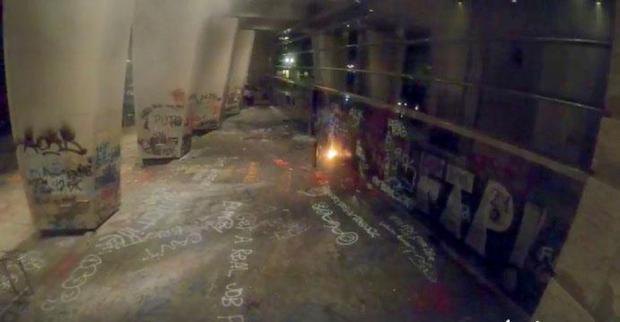 Police in Portland declared a riot Thursday night for the second time in three days after chaotic scenes in which 'hostile and violent' protesters broke into the federal courthouse and later set it alight.

Attempts were made to set two statues on fire in different parts of the city as outbursts of violence caused law enforcement to declare the riot just before midnight - a third was set alight.

Several arrests were made after demonstrators refused to leave the area and continued launching projectiles including fireworks at officers, forcing them to retreat inside.

The police reported that an open pocket knife was thrown at an officer as they attempted to clear the protesters.

Some say that the 'white fringe element' is taking over the moment and causing 'chaos', branding it another form of white supremacy.

The change has already seen a building holding black-owned businesses set on fire following a protest late last week and a potluck at a park in the heart of a black community turn into a violent clash with police.