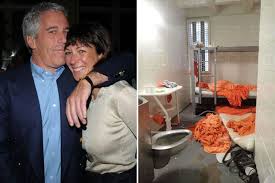 Epstein's alleged pimp was arrested by the FBI on Thursday on six charges of sex trafficking and perjury.

Following her arrest, Spencer Kuvin - who represents several of the late-paedo's victims in Florida - said the Brit, 58, may take her own life behind bars but also added that powerful people may try and silence her.

He told the Daily Mail: "It may be that she can't handle the fear of what's going to happen to her and takes matters into her own hands or there will be people who are very afraid of what she has to say."

The socialite, who is the daughter of disgraced media mogul Robert Maxwell, faces up to 35 years in prison if she is found guilty of the charges, it has been reported.

And Kuvin believes if she is jailed, Ghislaine will spend the rest of her life behind bars.

He said: "I don't think she is going to get out of jail alive. I said the same thing about Jeffrey Epstein and people laughed at me.

Woman Throws Coffee In Man's Face For Not Wearing A Mask, Gets Boyfriend's Ass Beat