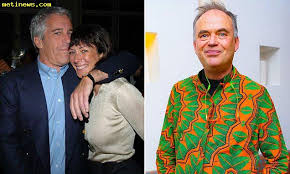 Maxwell, 58, was arrested on Thursday in New Hampshire and faces six counts relating to charges of enticing and trafficking minors for sex.

The connections stem from her relationship with pedophile Jeffrey Epstein, who killed himself in prison in August awaiting trial on sex trafficking charges.

She is being held without bail in the state, ahead of her transfer to New York - the jurisdiction which is prosecuting.

Those who know the French-born British socialite, who also holds U.S. citizenship, say they are concerned for her well-being.

'I'm absolutely worried for her safety,' said Christopher Mason, a TV host and journalist who has known Maxwell since the 1980s.

Mason, who is appearing in the new docu-series 'Surviving Jeffrey Epstein' in August on Lifetime, added that the threat to Maxwell — now headed to the same Manhattan jail where Epstein died last August — could be greater because of reports she might cooperate with authorities.

He said he feared she could take her own life, like Epstein did, or be killed.

'The authorities are open to the possibility of some cooperation,' Mason said, according to the New York Post.

Woman Throws Coffee In Man's Face For Not Wearing A Mask, Gets Boyfriend's Ass Beat