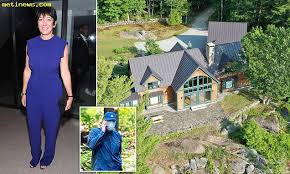 Oficers smashed through the front door to find her sitting down, dressed smartly

She was arrested on six counts including children grooming and trafficking

Armed officers smashed down the front door of Ghislaine Maxwell's secret hideaway before hauling her off in handcuffs.

As dramatic new details about the raid which led to the capture of Prince Andrew's close friend emerge, The Mail on Sunday can also reveal:

FBI spy planes flew above the £800,000 home, Tuckedaway, where Maxwell was staying from 4.20am – four hours before the bust – to ensure she didn't flee;

The stunned socialite 'barely registered' having handcuffs slapped on her wrists;

Maxwell's capture followed a £4 million, year-long 'cat-and-mouse' hunt for her by the FBI which saw her slip through their net at least once;