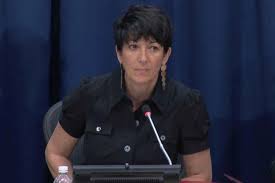 GHISLAINE Maxwell knows things that implicate Prince Andrew and will be willing to name names as she is "fighting for her freedom", two Jeffrey Epstein experts have claimed.

Connolly also speculated that prosecutors will try to strike a deal with Maxwell in return for her testifying about Andrew's relationship with Epstein's underage sex slave, Virginia Giuffre.

Giuffre has alleged in a lawsuit she was recruited aged 16 by Maxwell at Trump's Palm Beach country club, Mar-a-Lago, and alleges she had sex with the Duke, who denies all allegations of wrongdoing.

Meanwhile author Barry Levine said Maxwell, who was arrested by the FBI on Thursday on child trafficking charges, will now "open up a hornets nest" for Epstein's powerful acquaintances including the Duke, President Donald Trump and former President Bill Clinton as she reveals what she knows.