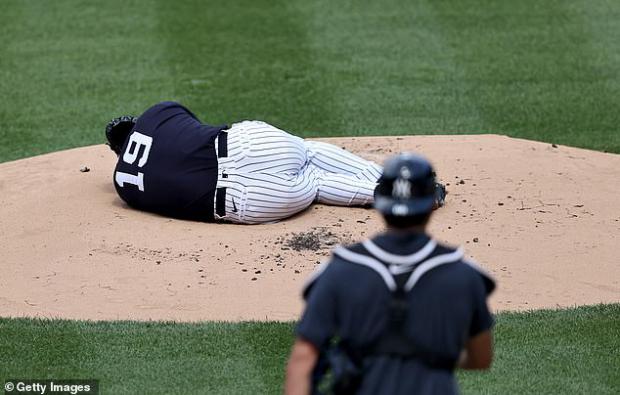 The New York Yankees first official summer camp workout was hit with horror Saturday as pitcher Masahiro Tanaka was slammed in the head by a line drive off the bat of slugger Giancarlo Stanton.

The frightening scene took place just minutes into live batting practice and caused right-hander Tanaka, 31, to collapse on the ground for around five minutes before he was able to sit up.

Tanaka's hat flew off and he immediately collapsed to the ground, cradling his head at Yankee Stadium.

Trainers quickly ran to Tanaka and appeared to check his vision, as Stanton also fell to the ground and held his head in fear.

They appeared to treat the right side of his head before Tanaka was helped to his feet and walked off the field with help.

Stanton, who had his jaw broken by a high fastball in 2014, bent over at home plate and watched motionlessly.