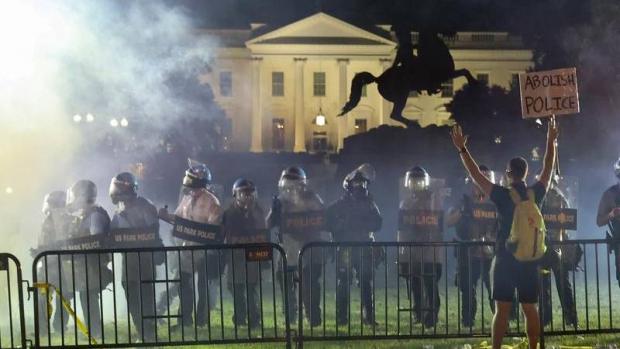 Only in America would it look like this: an elite-sponsored Maoist revolt, couched as a Black liberation movement whose canonical texts are a corporate consultant's white guilt self-help manual, and a New York Times series rewriting history to explain an election they called wrong.

Much of America has watched in quizzical silence in recent weeks as crowds declared war on an increasingly incoherent succession of historical symbols. Maybe you nodded as Confederate general Albert Pike was toppled or even when Christopher Columbus was beheaded, but it got a little weird when George Washington was emblazoned with "Fuck Cops" and set on fire, or when they went after Ulysses S. Grant, abolitionist Colonel Hans Christian Heg, "Forward," (a seven-foot-tall female figure meant to symbolize progress), the Portland, Oregon "Elk statue," or my personal favorite, the former slave Miguel de Cervantes, whose cheerful creations Don Quixote and Sancho Panza were apparently mistaken for reals and had their eyes lashed red in San Francisco.

Was a What the Fuck? too much to ask? It was! In the space of a few weeks the level of discourse in the news media dropped so low, the fear of being shamed as a deviationist so high, that most of the weirder incidents went uncovered. Leading press organs engaged in real-time Soviet-style airbrushing. Here's how the Washington Post described a movement that targeted Spanish missionary Junipero Serra, Abraham Lincoln (a "single-handed symbol of white supremacy," according to UW-Madison students), an apple cider press sculpture, abolitionist Mathias Baldwin, and the first all-Black volunteer regiment in the Civil War, among others:

Across the country, protesters have toppled statues of figures from America's sordid past — including Confederate generals — as part of demonstrations against racism and police violence.

The New York Times, once the dictionary definition of "unprovocative," suddenly reads like Pol Pot's Sayings of Angkar. Heading into the Fourth of July weekend, the morning read for upscale white Manhattanites was denouncing Mount Rushmore, urging Black America to arm itself, and re-positioning America alongside more deserving historical parallels in a feature about caste systems:

Throughout human history, three caste systems have stood out. The lingering, millenniums-long caste system of India. The tragically accelerated, chilling and officially vanquished caste system of Nazi Germany. And the shape-shifting, unspoken, race-based caste pyramid in the United States.