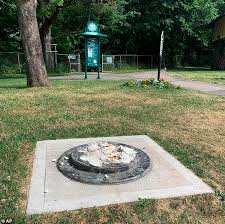 "Rochester Police are investigating damage done to a statue of Frederick Douglass in Maplewood Park. It happened over the weekend, and police say that the statue was torn off its base, and left about 50 feet from its pedestal. The statue had been placed over the fence to Genesee River gorge and was leaning against the fence," reports WXXI News.

"Police say in addition to the damage at the bottom of the statue, one of the fingers on the left hand of the statue was damaged. Aside from that damage, there was no graffiti on the statue or in the surrounding park. The statue has been removed for repairs."

Frederick Douglass was a social reformer who escaped from slavery in Maryland and went on to become a national leader of the abolitionist movement in Massachusetts and New York who was noted for his outstanding speeches and antislavery writings.

A 2 minute perusal of Wikipedia would have confirmed this fact for whoever decided to topple the statue, but facts don't seem to matter anymore.

1 Comments in Response to "Anarchists Have No Bounds" - Trump Rage-Tweets...

Trumps a fool. Anarchists could not care less about statues but statists do. "Anarchists did not try to carry out genocide against the Armenians in Turkey; they did not deliberately starve millions of Ukrainians; they did not create a system of death camps to kill Jews, gypsies, and Slavs in Europe; they did not fire-bomb scores of large German and Japanese cities and drop nuclear bombs on two of them; they did not carry out a Great Leap Forward that killed scores of millions of Chinese; they did not attempt to kill everybody with any appreciable education in Cambodia; they did not launch one aggressive war after another; they did not implement trade sanctions that killed perhaps 500,000 Iraqi children. In debates between anarchists and statists, the burden of proof clearly should rest on those who place their trust in the state. Anarchy's mayhem is wholly conjectural; the state's mayhem is undeniably, factually horrendous." ~Robert Higgs

Lebanon's Prime Minister To Step Aside, Clearing Way For 3rd Government In Less Than A Year