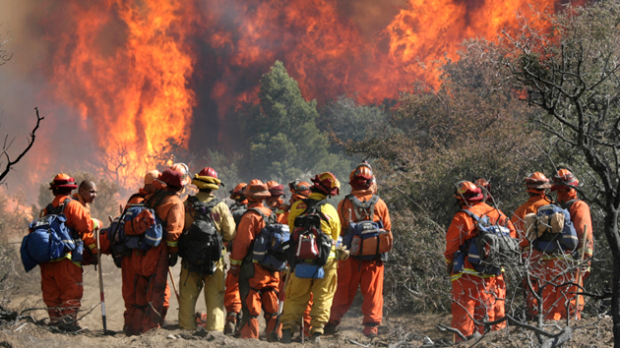 As California's deadly wildfire season approaches, over half of the state's inmate firefighters are currently unavailable to serve the northern half of the state, after prison officials placed 12 of the state's 43 inmate fire camps on lockdown thanks to a giant COVID-19 outbreak at a Lassen County prison - which serves as the training center for the Conservation Camp Program.

Approximately 2,200 California inmates serve on the front lines of the state's increasingly frequent and destructive blazes, according to the Sacramento Bee. Overall, the program has 3,100 inmates stationed at minimum security facilities across 27 counties.

To put it in context, Cal Fire has approximately 6,500 year-round employees, which swells to around 9,000 during fire season. Inmates earn between $2 and $5 per day, plus $1 per hour while fighting a fire.

As of Friday, at least 220 inmates at Susanville prison located 120 miles north of Lake Tahoe tested positive for COVID-19 over the past two weeks, prompting the California Department of Corrections to halt movement in and out of the prison - which includes sending inmates to the conservation camps, according to the state prison system spokesman, Aaron Francis.

Until the lockdown lifts, only 30 of the state's 77 inmate crews are available to fight a wildfire in the north state, prison officials said.

California's incarcerated firefighters have for decades been the state's primary firefighting "hand crews," and the shortage has officials scrambling to come up with replacement firefighters in a dry season that is shaping up to be among the most extreme in years. The state is hunting for bulldozer crews and enlisting teams that normally clear brush as replacements. -Sacramento Bee

California Will Soon Be Paying $1,250 To People Who Test Positive For Coronavirus