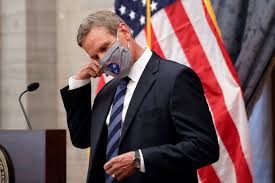 NASHVILLE, Tenn. (AP) — Earlier this week, as Tennessee registered what then was its highest single-day coronavirus case increase, Gov. Bill Lee held a news conference and issued a stern response.

It wasn't a mandate to wear masks in public or clamp down on businesses or social gatherings. Instead, it was a plea for residents to do the right thing.

"When we have people dying in this state as a result of this virus, we should be taking personal responsibility for this," the Republican governor said.

It was the same message Lee issued in late March as the COVID-19 disease was beginning to spread. He has vowed to stick to the personal responsibility mantra, with no plans to reinstate stay-at-home restrictions or impose statewide mandates — even as photos of unmasked people crowding bars and outdoor concerts across Tennessee spread across social media.

Instead, Lee signed an executive order Friday that allows local officials to issue their own mask mandates if they want — as Nashville and Memphis had already done.

Elevating a message of personal responsibility over statewide crackdowns on businesses and requirements for people in public spaces has been a consistent approach among certain governors during the coronavirus crisis. That's especially true in Republican-leaning states that had relatively few cases in the initial months of the outbreak but have begun to spike in recent weeks.

"You shouldn't have to order somebody to do what is just in your own best interest and that of your family, friends and neighbors," Alabama Gov. Kay Ivey, a Republican, said earlier this week as she urged people to wear masks and take other precautions but downplayed the effectiveness of statewide orders.

Texas Gov. Greg Abbott, a Republican, has frequently invoked personal responsibility but took more decisive action this week in ordering Texans to wear masks in public in most cases. That came after another Republican governor, Doug Ducey of Arizona, changed direction and allowed mayors to make mask-wearing mandatory in their cities.

Did the governor give you that order? Or was it only general wording that you assumed yourself into somehow? Ask him/her. If it really is an order for you to follow, get as much evidence as you can from paperwork, videoed responses of government people. Then do the one thing necessary to keep the governor from breaking the basic 13th Amendment law. Invoice him/her so that there isn't any involuntary servitude. Of course, if you want to obey him/her, you can't do this. But make your firm - even written - statement to the governor that you don't wish to follow the order, and is it still a required order for you even if you don't wish. If it remains an order, be an honorable person by invoicing him/her for the order, to keep him/her from breaking the 13th Amendment, no involuntary servitude, Oath of Office.