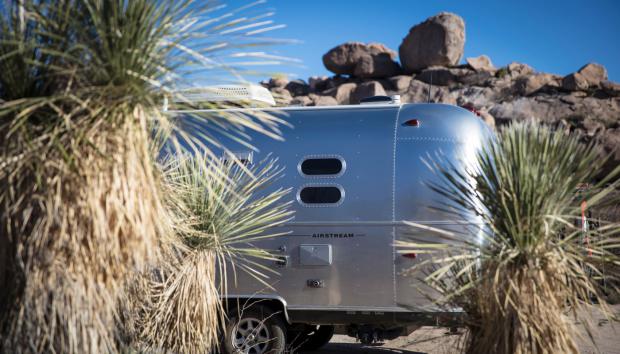 A few weeks ago, we were headed east on I-10 across southern Arizona en route to Rockhound State Park in Deming, New Mexico, when it became clear that we were going to have to drive into the night if we wanted to make our destination. We'd already been on the move since dawn, the low tangerine sun behind us cast long shadows from the saguaros, and Deming was still three hours up the road. In these pinch moments, when we're tired, short on time, don't want to hassle with setup—and only in these moments—it's tempting to pull Artemis, which is what we call our Airstream, into a Walmart. Many of the company's stores (though not all) allow RVs and trailers to camp in their lots, providing simplicity and succor to weary travelers. Scanning my phone, I discovered one just a few miles ahead, in the town of Benson.

Despite our fatigue, we did not stop. And neither should you.

This is nothing against Walmart. I'm no big fan of the superstores, but these days, when more cities are legislating against mobile dwellers, it's actually pretty cool that the company permits RVs and campers. (Aside: the stores are also often the only source of organic food in rural settings.) However, we avoid them because the experience is pretty much the antithesis of what we want out of road life. Staying in a parking lot with others is like eating fast food: sure it's easy, but a visit to the grocery store will produce healthier—if simpler—food and leave you feeling better afterward. The one time we took refuge in a big-box parking lot, we were anxious and exposed all night beneath the blue fluorescent lights, and felt cheap and dirty in the morning. Besides, camping in a parking lot is simply unnecessary, at least not in the American West.

After scanning my phone for a Walmart and resisting the temptation, I flipped over to the OnX app and discovered that we were surrounded by mountains. The Dragoons, the Chiricahuas, the Rincóns, the Galiuros, the Pinaleños—they were all within an hour's striking distance. And from the look of it, each was replete with public land. A quick cross-reference to AllStays produced a promising option: a place called Indian Bread Rocks, just south of Bowie, was less than an hour up the road and, judging by a satellite view, there were plenty of dispersed campsites tucked in a spray of rock outcrops. Plus, it looked to be only 15 minutes off the highway.

Checkpoints will be set up at New York City's tunnels and bridges to trace travelers...

Airlines Cracking Down On Masks