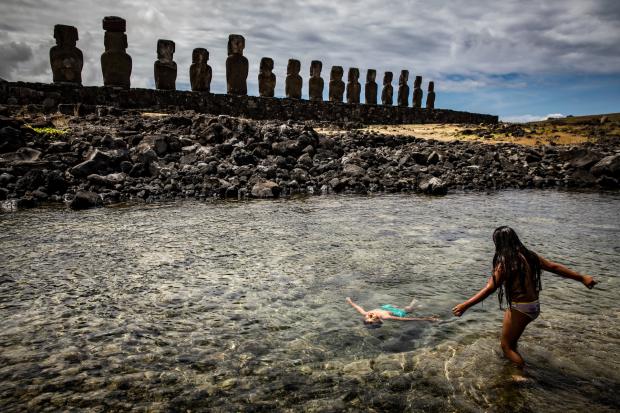 Native Americans reached Polynesia 800 years ago by raft and interbred with local islanders — centuries before European explorers arrived in the Pacific.

Researchers from the US and Mexico used large-scale genetic analyses to show that modern-day Polynesian populations contain traces of Native American DNA.

Statistical analysis revealed that prehistoric Polynesian populations first met and interbred with people from what is today Colombia around the year 1,150 AD.

This event — which took place on the South Marquesas islands  — occurred at  roughly the same time Polynesians first arrived in the area from the west.

The finding finally confirms a long-running theory that the two groups had met — and explains why sweet potatoes from the Americas can be found in Polynesia.

Native Americas may have sailed on a raft like the Kon-Tiki — the 1947 vessel led by the explorer Thor Heyerdahl which crossed from Peru to the Polynesian Islands.

The notion that Native American and Polynesian populations underwent prehistoric interactions has long been a subject of debate for archaeologists and historians.

While some experts questioned how the two groups, separated by thousands of miles of open ocean, could have interacted, others pointed to a seemingly unlikely clue for the meeting — the sweet potato.