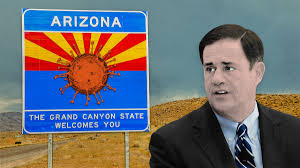 Two weeks ago, Brett Barry walked into a CVS near his home in Phoenix to get a coronavirus test. Barry, a 55-year-old professional "mentalist", had a tooth implant scheduled for the next week, and his dentist's office required a negative COVID-19 test result before the surgery. It took three days just to schedule a testing appointment, and the pharmacy said it could be up to a week before his results came back. But a week went by, and Barry's dentist appointment came and went, and the results did not show up.

As of yesterday, 14 days after Barry was tested for the coronavirus, he still had not received his results.

In Arizona—which began reopening in early May, only to lock down again after being hit with a tidal wave of cases—the testing infrastructure is underwater. Residents like Barry are waiting up to two weeks for results, while others are waiting up to 13 hours just to get tested. The top testing lab in the state said it is receiving double the amount of orders it can handle. And a crucial testing instrument isn't arriving until August.

"What really pisses me off is I sheltered [in place] for three months," Barry said, adding that he has diligently been wearing a mask in public since April. "And now it looks like we're going to have to start over again."

In recent weeks, Arizona has climbed to No. 8 on the list of states with the most confirmed coronavirus cases, passing 100,000 on Monday. On Tuesday, the state hit a record high number of deaths in a single day. Ninety percent of ICU beds are full, and some hospitals are reportedly shipping patients out of state.

Kate Gallego, the mayor of Phoenix, has even called on the Federal Emergency Management Agency (FEMA) to step in, saying her city is in a "crisis related to testing."

Democide: Understanding the State's Monopoly on Violence and the Second Amendment