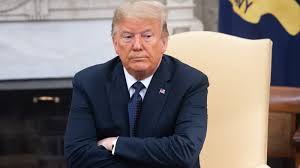 An angry Trump, meanwhile, tweeted that the Supreme Court decision is "all a political prosecution," and that "Courts in the past have given "broad deference." BUT NOT ME!"

The Supreme Court sends case back to Lower Court, arguments to continue. This is all a political prosecution. I won the Mueller Witch Hunt, and others, and now I have to keep fighting in a politically corrupt New York. Not fair to this Presidency or Administration!

Courts in the past have given "broad deference". BUT NOT ME!

....No Republican Senate Judiciary response, NO "JUSTICE", NO FBI, NO NOTHING. Major horror show REPORTS on Comey & McCabe, guilty as hell, nothing happens. Catch Obama & Biden cold, nothing. A 3 year, $45,000,000 Mueller HOAX, failed - investigated everything....

Virus Update: The FDA & The War Over HC