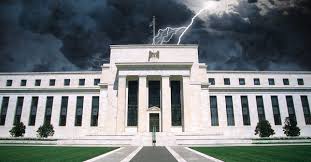 Yet at the same time, the Fed also announced that it would impose restrictions on bank dividends and stock buybacks, essentially preventing banks from passing along their profits to shareholders.

If those two statements strike you as completely contradictory, you're right.

If the Fed isn't worried in the slightest because the banking system remains strong 'even under the harshest downside scenarios', then why restrict what banks can/cannot do with their private profits?

This forked tongue communication style is becoming somewhat of a trend.

Back in March, the head of the FDIC released a video asking Americans to NOT withdraw their money from the banks.

"Your money is safe at the banks," she said, with soft piano music in the background. "The last thing you should be doing is pulling your money out of the banks thinking it's going to be safer somewhere else."

This reminds me of back when Ben Bernanke repeatedly told the public, and Congress, that housing prices would continue rise, and that a subprime mortgage meltdown would not affect the broader economy.