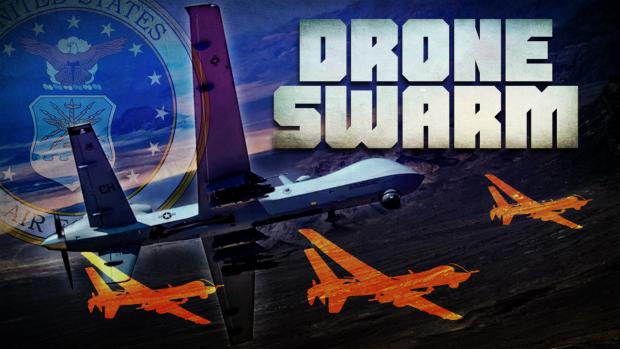 While the phrase "system of systems" has entered relatively common usage some years ago as a reflection of the need to field systems and assets with complementary capabilities that will operate as part of a synergistic whole in their respective domain of warfare, in the realm of aerospace combat the United States is moving in the direction of the "swarm" as the key organizing principle of its combat paradigm.

The US Air Force Future Operating Concept which attempts to envision USAF operations in the year 2035 places "interconnectedness" high on the list of buzzwords, and promotes such goals as "Global Integrated Intelligence, Surveillance, and Reconnaissance" and "Global Precision Strike", all being controlled from "Multi-Domain Operations Centers" whose ability to manage a wide variety of interconnected systems and assets would guarantee getting inside the adversary's "Observe, Orient, Decide, Act" (OODA) Loop, a long-standing Holy Grail among US airmen ever since USAF Colonel John Boyd formulated the concept as a result of his Korean War experiences.

Advances in communications, sensors, and artificial intelligence have meant that munitions have progressed greatly beyond being little more than bullets, launched at a specific target and then guided to it by either its on-board sensors perceiving some aspect of the electromagnetic spectrum emanated by the target, or by an autopilot navigating it and its lethal payload to its destination.

The swarm approach apparently became attractive to the US military following the cruise missile strikes against targets in Syria, during which the slow-moving trickle of subsonic, non-maneuverable, but very expensive Tomahawk SLCMs was combed out of the sky by a variety of modern air defense systems. Evidently even the current sophisticated Tomahawk mission planning software is incapable of delivering the "time on target" response necessary to overcome local air defenses. On the other hand, an AI-enhanced swarm of smaller, cheaper munitions might succeed where the by now dated Tomahawk had failed.