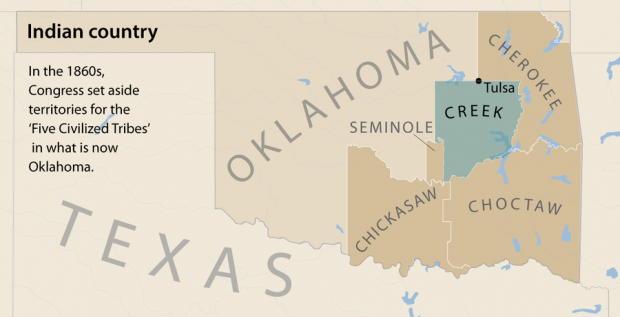 In a 5-4 vote, the United States Supreme Court on Thursday sided with Oklahoma tribes in McGirt v. Oklahoma, saying much of the eastern half of Oklahoma is still an Indian reservation.

"Today we are asked whether the land these treaties promised remains an Indian reservation for purposes of federal criminal law. Because Congress has not said otherwise, we hold the government to its word."

IS THE EASTERN HALF OF OKLAHOMA A RESERVATION?

The central question in this case: Were the Muscogee (Creek) Nation's boundaries as set by the 1866 Treaty ever dissolved by Congress? Though the federal government largely dismantled Tribal governments in Oklahoma in the late 1800s, if the 1866 and subsequent Treaties are still valid, then a large portion of Eastern Oklahoma is still Indian Country. The State of Oklahoma believes this would fundamentally change law enforcement and could resultin thousands of criminal cases being overturned.

The defendant in this case, Jimcy McGirt, is a citizen of the Seminole Nation. He claims he was prosecuted by the wrong court. Because he is a Tribal citizen and committed his crime in on Creek Tribal land, he says the State of Oklahoma never had jurisdiction to try him.

His guilt isn't in question in this case — he's serving a life sentence for sex crimes he committed against a four year-old child. The argument is that McGirt believes he should have been prosecuted in federal court, not state court, because of where his crime was committed.

In the majority opinion, Gorsuch wrote about how this criminal case is actually a matter of Tribal sovereignty.