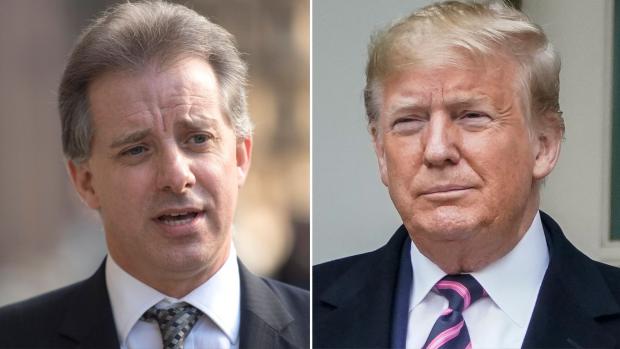 Donald Trump has called for the extradition of a former MI6 agent who was behind a controversial dossier about his alleged links to Russia.

Christopher Steele, now a director of Orbis Business Intelligence, was responsible for the 'dirty dossier' published in 2016 that alleged Russian influence over President Trump.

The Steele Dossier contained allegations of collusion between Mr Trump's US presidential campaign and the Kremlin, which have been denied by both parties.

On Wednesday, Orbis was ordered to pay compensation to two Russian businessmen that had complained about data protection breaches including inaccuracies in the dossier relating to them.

Taking to Twitter, the US President shared a report on London's High Court ruling and claimed that Mr Steele should go on trial over the document.

In his retweet, Mr Trump said: 'This man should be extradited, tried, and thrown into jail…'

An a second retweet, Mr Trump shared another report about the High Court's decision, adding: 'Bring back Steele!!!'

The Steele Dossier claimed that the Russian Government had embarrassing material that could be used to hold influence over Trump through blackmail.

Sargon Says Tim Pool Is On The Trump Train, Well Here's The TRUTH The Democrats Are INSANE

Trump Is Saying Epstein Was Taken Out?!

The Truth Is A Harsh Mistress