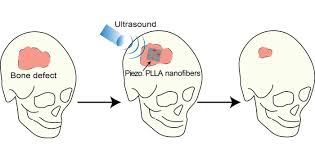 When it comes to broken bones, the children of generation Z may never have to deal with the itching that comes from wearing a cast—an all-too-familiar scenario for both kids and adults healing from accidents.

Instead, doctors may, in the near future, be able to repair broken bones by encasing the fracture in a field of electricity, which would be especially welcome for treating body parts, such as the scull, where casts don't work.

A group of biomedical engineers from the University of Connecticut have invented a scaffold of non-toxic polymer that also generates a controllable electrical field to encourage bone growth. The researchers published a paper in Nano Energy after using their device to cure skull fractures in mice.

The scaffold mimics the natural electric field produced by our bodies, a characteristic called piezoelectric, meaning to generate electricity from vibrations, and can be affixed over the damaged bone without significant surgery.