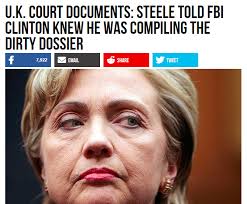 Notes taken by the FBI indicate that Steele was told that Clinton herself was aware that he was commissioned to create the Trump-Russia dossier which alleges collusion between Donald Trump's presidential campaign and the Russian government during the 2016 election, amongst various other wild allegations.

Three months later, the FBI would conceal this critical information from the Foreign Intelligence Surveillance Court (FISC) in order to obtain a warrant to spy on Trump's tangential campaign adviser, Carter Page.

On Wednesday, a London judge ordered Steele to pay damages to two Alfa Bank partners for publishing "inaccurate or misleading" material in his infamous dossier, including claims that the banks funneled "illicit cash" to Russian President Vladimir Putin.

The 57-page court ruling reveals that the FBI recorded notes of the July 5th meeting they held with Steele at his London Orbis Business office, where he handed the FBI the documents containing his unsubstantiated, largely-discredited anti-Trump charges.