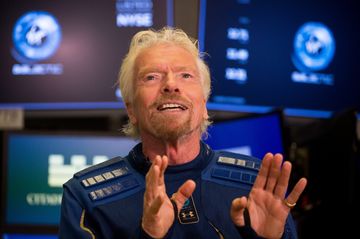 (Bloomberg) -- Richard Branson has spent decades cultivating an image as a daredevil entrepreneur, glorifying risk with stunts such as sky-diving or hot-air ballooning across the ocean to promote everything from soda to space travel. Now, less than a week shy of his 70th birthday, Branson is taking one of the biggest gambles ever to save his flagship airline from the ravages of the coronavirus outbreak.

With trans-Atlantic travel largely grounded for the foreseeable future, the company most responsible for building his global brand -- Virgin Atlantic Airways Ltd. -- was being pushed to the brink of collapse. After begging a reluctant British government for a bailout, Branson concluded his best option for raising money was to sell shares in Virgin Galactic Holdings Inc., the orbital tourism venture that has become his obsession in recent years.

On Tuesday, Virgin announced a 1.2 billion-pound ($1.5 billion) rescue package that includes about 170 million pounds from U.S. hedge fund Davidson Kempner Capital Management and 200 million pounds that Branson got from diluting his stake in Virgin Galactic.

"It's the ticket to our continuing journey, and hopefully it also means a better birthday for Richard," said Shai Weiss, Virgin Atlantic's chief executive officer. "He's put in 200 million, but we've helped wrap it up for him."

Woo-Hoo! Biden Kills Off an Estimated 52,100 Jobs in First Day as President -- During a Pandemic!