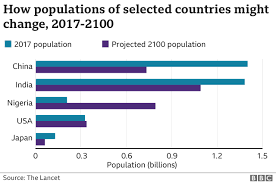 The BBC reports that the research, published in the Lancet highlights that the global fertility rate almost halved to 2.4 in 2017, and projections indicate that it will fall below 1.7 by 2100.

For further context, In 1950, an average of 4.7 children were being born for every woman.

The research suggests that almost every country on the planet could have shrinking populations by the end of this century, with 23 nations projected to see their populations halve by 2100.

The research indicates that the total global population will peak at 9.7 billion in 2064, and then naturally shrink back to 8.8 billion come the end of the century.

"That's a pretty big thing; most of the world is transitioning into natural population decline," Professor Christopher Murray noted.

"I think it's incredibly hard to think this through and recognise how big a thing this is; it's extraordinary, we'll have to reorganise societies," Murray further warned.