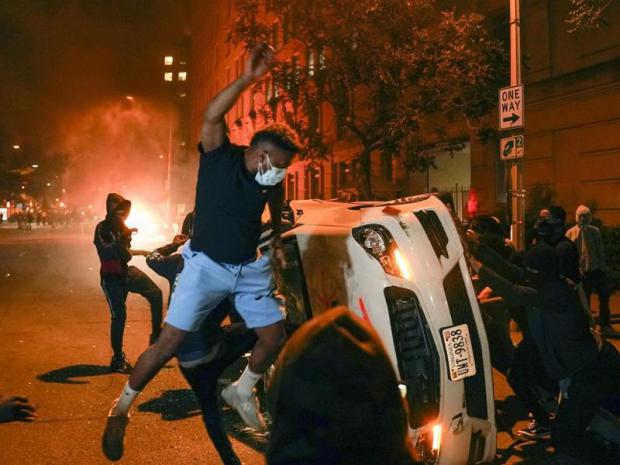 "Burning, rioting, and looting are criminal acts and should never be justified or excused," said Heritage Foundation President Kay James. "It is an absolute scandal that political and corporate elites would not only excuse this behavior, but cheerlead the destruction of communities, the ransacking of local family businesses, and the skyrocketing rates of violence against the most vulnerable citizens. We must ... expose the powerful people who are providing aid and comfort to the domestic enemies of our American republic."

In early July, House Speaker Nancy Pelosi was asked about the destruction of statues nationwide when a reporter pressed her on one such toppling in Baltimore.

"Shouldn't that be done by a commission or the City Council, not a mob in the middle of the night throwing it into the harbor?" the reporter asked.

"People will do what they do," Pelosi said.

Former senior FBI official Andrew Bringuel II said Pelosi failed to uphold the law, which lawmakers swear to do when they take office.

"Politicians are saying, 'It's not OK necessarily, but we understand why you want to destroy these statues,'" said Bringuel, a retired supervisory special agent at the FBI's Behavioral Analysis Unit and executive director of the Behavioral Science Unit. "That doesn't negate the fact that these people are committing acts of civil disobedience. Civil disobedience short of terrorism is still a violation of law."