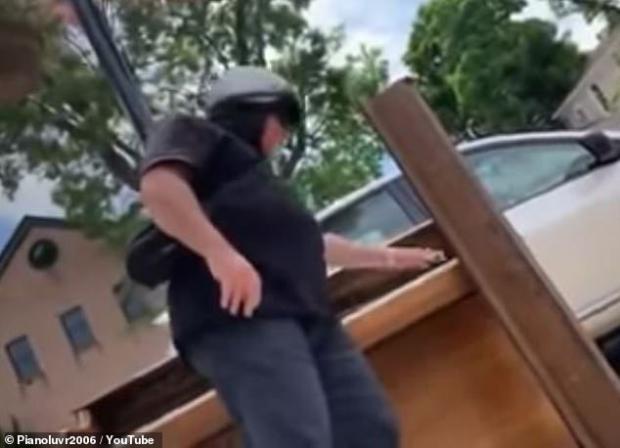 In recently caught cellphone footage, the 71-year-old singer-songwriter could be heard playing a Ragtime-type tune on the sidewalk, after spotting the instrument sitting curbside.

As he examined the condition of the keys and mechanics after his impromptu show, the five-time Grammy winner concluded it was a 'perfectly good piano.'

The Piano Man noted: 'The action is good. It just needs tuning. And the finish is beat.'

'It's a shame to throw it out, should at least be donated to St. Vincent de Paul or something,' he told eyewitnesses, while wearing a motorcycle helmet.

After someone suggests a thrift store nearby, he agrees, 'They'd probably take it.'

'These are laminated keys, the pedals work, the action is great,' Joel furthers. 'The mechanics are perfect.'

According to Newsday, Joel was riding a motorcycle when the sight of the abandoned piano caught his eye, in the community of Huntington.

His rep confirmed the man in the now-viral YouTube video, uploaded on June 26, is indeed the musical icon to People.