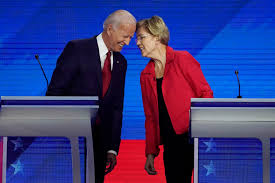 Why it matters: If Biden wins in November, it's clear that Warren will significantly shape his approach — on domestic policy in particular — whether or not her name's on the ticket.

Her influence helps explain why Warren is still seen as a strong potential pick in a year when being 71 and white probably works against her.
Biden is expected to announce his running mate in early August from an all-female shortlist of candidates.
Driving the news: The climate plan Biden touted in a speech this week includes an expedited target date for 100% clean electricity on a timetable favored by Warren and another former contender, Jay Inslee, as Reuters noted.

On March 14, Biden endorsed Warren's bankruptcy proposal, which includes a student debt relief portion.
About a week later he tweeted about increasing Social Security checks by $200 per month and forgiving a minimum of $10,000 per person in federal student loans — two of Warren's plans.
For his "Build Back Better" economic recovery plan, three sources familiar told Axios that the Biden and Warren teams consulted closely together on this plan and many of Warren's ideas are reflected in it.