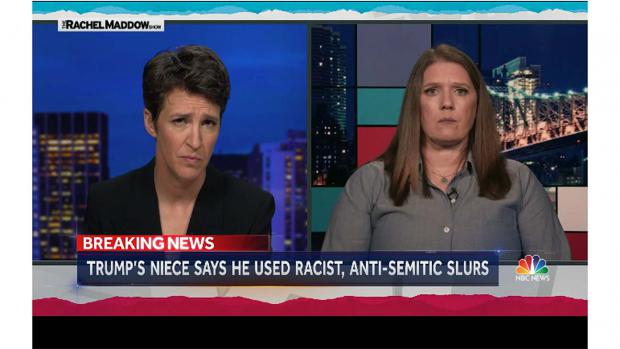 Maddow's sit-down with President Donald Trump's niece drew a record 5.23 million viewers to the show, leading every show on cable and broadcast in primetime Thursday. The audience for the hour easily surpassed The Rachel Maddow Show's previous high of 4.47 million viewers, set in January for an interview with impeachment figure Lev Parnas.

Mary Trump's book, Too Much and Never Enough, has become an instant best-seller for its account of how the Trump family shaped her uncle's personality. Mary Trump, a clinical psychologist, details how her family played a role in developing what she says is Donald Trump's narcissism and inability to empathize.

During the interview Thursday, Mary Trump claimed the president has routinely used racial slurs and told the host, "I want people to understand what a failure of leadership this is, and the reason he's failing at it is because he's incapable of succeeding at it."

The Rachel Maddow Show topped all of primetime Thursday in total viewers and led all of cable in the key news demographic of adults 25-54. It marked the second time in less than a month that a regular cable news program topped 5 million viewers (excluding special coverage): Sean Hannity's June 25 town hall with President Trump drew 5.11 million viewers on Fox News.