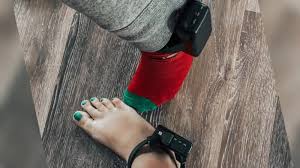 A CORONAVIRUS-infected couple has been put under house arrest and forced to wear ankle monitors after refusing to stay home.

Elizabeth and Isaiah Linscott said personnel from the health department and sheriff's office showed up at their Kentucky home after she declined to sign a self-quarantine order, according to reports.

The woman underwent a voluntary test for Covid-19 before going to her parents in Michigan and found out she was positive but did not have any symptoms.

The health department then contacted Elizabeth and requested that she signed documents that would restrict her travel unless she called the department first, according to WBTV.

She said she chose not to sign the documents because of one sentence, it's reported.

"I will not travel by any public, commercial or health care conveyance such as ambulance, bus, taxi, airplane, train or boat without the prior approval of the Department of Health," the document read.