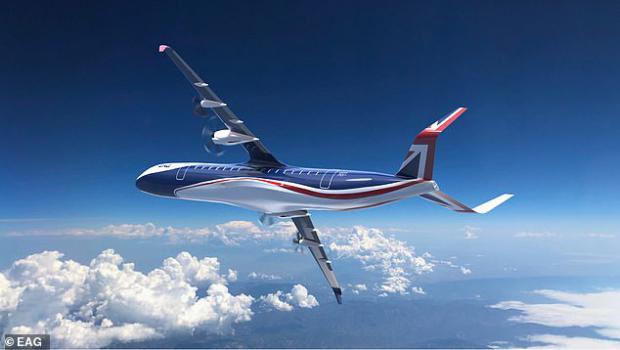 A British firm has unveiled concept images for what it claims will be the 'largest commercial hybrid plane in the world'.

It's a hybrid passenger plane – meaning it's powered partly by an environmentally-friendly electric engine and other part conventional jet fuel – and has a range of 800 nautical miles (920 regular miles).

But the aircraft range will be extended to 1,200 nautical miles (1,381 miles beyond 2030) as battery energy density improves.

The regional aircraft has been designed by the Electric Aviation Group (EAG), a Bristol-based engineering and development firm.

The HERA aircraft, which will be in service by 2028, will create job opportunities in the aerospace, manufacturing and engineering industries post-Brexit, according to the designers.

'Significant investments have been raised to develop sub-19 seat hybrid and all-electric aircraft which we believe is the wrong strategy,' said Kamran Iqbal, founder and CEO at EAG.