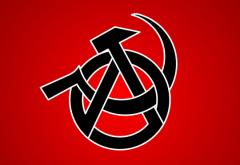 Marxism-Stalinism has unfortunately conquered SDS, but anarcho-communism has attracted many leftists who are looking for a way out of the bureaucratic and statist tyranny that has marked the Stalinist road.

And many libertarians, who are looking for forms of action and for allies in such actions, have become attracted by an anarchist creed which seemingly exalts the voluntary way and calls for the abolition of the coercive State.

It is fatal, however, to abandon and lose sight of one's own principles in the quest for allies in specific tactical actions.

Anarcho-communism, both in its original Bakunin-Kropotkin form and its current irrationalist and "post-scarcity" variety, is poles apart from genuine libertarian principle.