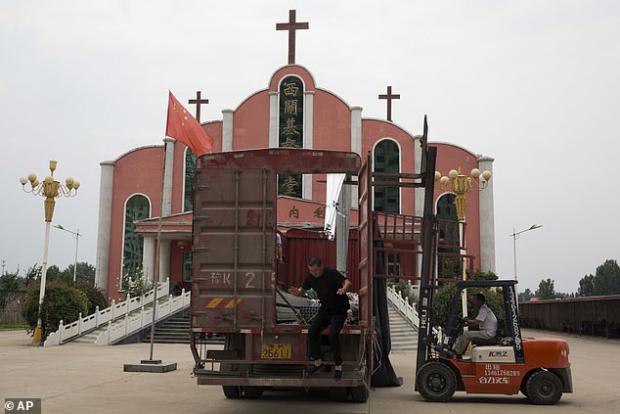 Furthermore, officials of Shanxi, another region, demanded religious images be taken down and replaced with pictures of Communist leaders at the homes of impoverished believers, said independent outlet Bitter Winter.

The reports come as China is facing unprecedented criticism against its tight control over its religious population, especially the Muslim ethnic minorities.

Officials in charge of religious affairs in Huainan in the eastern province of Anhui allegedly barged into the local Shiwan Christ Church to dismantle its cross on Saturday and Sunday.

The officials had required the church to take down its cross a week earlier, reported Radio Free Asia citing local sources.

When they arrived at the venue to impose the order by force at the weekend, they were met with dozens of believers who had gathered to try to prevent them from bulldozing the holy sign, the article claimed.

Similar scenes were said to occur in Yongjia in Zhejiang Province on July 7.

The local government sent a crane and nearly 100 workers to demolish the crosses on Ao'di Christ Church and Yinchang Christ Church, according to US-based pressure group China Aid.