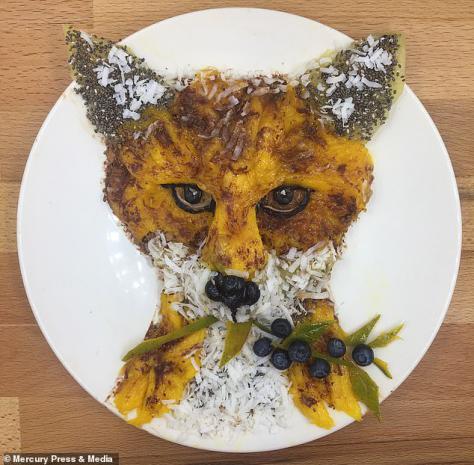 Michelle Rozmarin Tamburro, 45, from New Jersey, prepares the fruit creations for Hudson, five, before she leaves to travel to her office in New York City, where she works as a jewellery designer.

It means that he wakes up every morning to the joy of a new design, such as a lion crafted from slices of pineapple and pancake, and a parrot made from apple, raspberries and yellow peppers.

And the intricate meals, which each take one hour to put together, have allowed the mother-of-one to connect with Hudson.

She talks to him about the designs when she arrives back home from work and they inject some fun into the most important meal of the day.

Michelle said: 'I was worried I was missing out on special time with him because I wasn't there when he woke up.

'The breakfasts give me something to talk to him about when I return in the evening.'

Hudson, who is cared for by his father - Michelle's husband - when she is at work, loves the meals, which sometimes resemble his favourite superheroes.