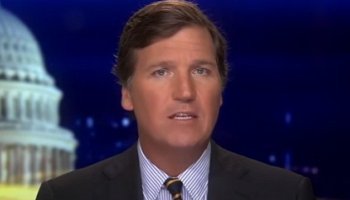 In November of 2018, an organized Antifa chapter known as "Smash Racism DC" showed up at the home of Fox News host Tucker Carlson - ringing his doorbell as their violent co-founder, Michael Isaacson - who loves dead cops and called for VP Mike Pence's assassination - led them in chants such as "Tucker Carlson, we will fight! / We know where you sleep at night!"

Later that evening, the group posted "Every night you spread fear into our homes -- fear of the other, fear of us, and fear of them. Tonight you're reminded that we have a voice. Tonight, we remind you that you are not safe either."

The angry mob would return weeks later to further hassle Carlson and his family.

The previous month, Carlson said that he's "not a restaurant guy anymore" because of the constant harassment from the left - including a verbal altercation the Fox News host got into with a man who allegedly called his 19-year-old daughter a "whore" at at a Charlottesville, VA club.

Due to the ongoing threats, the Carlsons packed up and moved to a new house in order to keep his family out of harm's way.

Except now, Carlson claims that the New York Times is about to dox his family by revealing their new address in an upcoming article.

This was his response Monday night:

"As a matter of journalism, there is no conceivable justification for a story like that. The paper is not alleging we've done anything wrong, and we haven't. We pay our taxes. We like our neighbors. We've never had a dispute with anyone. So why is The New York Times doing a story on the location of my family's house? Well, you know why. To hurt us, to injure my wife and kids so that I will shut up and stop disagreeing with them," Carlson said, adding "Editors there know exactly what will happen to my family when it does run..."