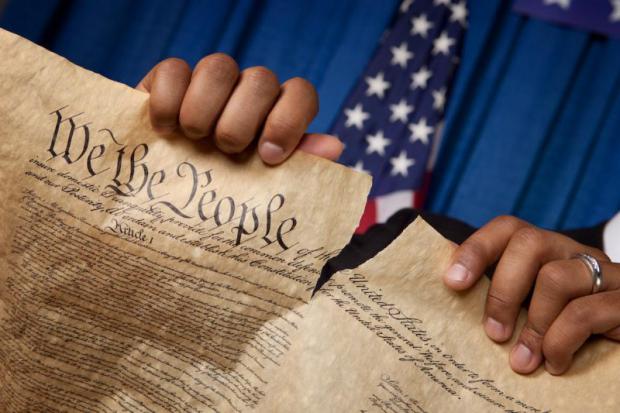 "I don't need invitations by the state, state mayors, or state governors, to do our job. We're going to do that, whether they like us there or not."—Acting Homeland Security Secretary Chad Wolf's defense of the Trump Administration's deployment of militarized federal police to address civil unrest in the states

This is a wake-up call.

What is unfolding before our very eyes—with police agencies defying local governments in order to tap into the power of federal militarized troops in order to put down domestic unrest—could very quickly snowball into an act of aggression against the states, a coup by armed, militarized agents of the federal government.

At a minimum, this is an attack on the Tenth Amendment, which affirms the sovereignty of the states and the citizenry, and the right of the states to stand as a bulwark against overreach and power grabs by the federal government.

If you're still deluding yourself into believing that this thinly-veiled exercise in martial law is anything other than an attempt to bulldoze what remains of the Constitution and reinforce the iron-fisted rule of the police state, you need to stop drinking the Kool-Aid.

This is no longer about partisan politics or civil unrest or even authoritarian impulses.

This is a turning point.

Unless we take back the reins—and soon—looking back on this time years from now, historians may well point to the events of 2020 as the death blow to America's short-lived experiment in self-government.

The government's recent actions in Portland, Oregon—when unidentified federal agents (believed to be border police, ICE and DHS agents), wearing military fatigues with patches that just say "Police" and sporting all kinds of weapons, descended uninvited on the city in unmarked vehicles, snatching protesters off the streets and detaining them without formally arresting them or offering any explanation of why they're being held—is just a foretaste of what's to come.

One of those detainees was a 53-year-old disabled Navy veteran who was in downtown Portland during the protests but not a participant. Concerned about the tactics being used by government agents who had taken an oath of office to protect and defend the Constitution, Christopher David tried to speak the "secret" police. Almost immediately, he was assaulted by federal agents, beaten with batons and pepper sprayed

Another peaceful protester was reportedly shot in the head with an impact weapon by this federal goon squad.

The Trump Administration has already announced its plans to deploy these border patrol agents to other cities across the country (Chicago is supposedly next) in an apparent bid to put down civil unrest. Yet the overriding concerns by state and local government officials to Trump's plans suggest that weaponizing the DHS as an occupying army will only provoke more violence and unrest.

We've been set up.

Under the guise of protecting federal properties against civil unrest, the Trump Administration has formed a task force of secret agents who look, dress and act like military stormtroopers on a raid and have been empowered to roam cities in unmarked vehicles, snatching citizens off the streets, whether or not they've been engaged in illegal activities.

As the Guardian reports, "The incidents being described sound eerily reminiscent of the CIA's post-9/11 rendition program under George W Bush, where intelligence agents would roll up in unmarked vans in foreign countries, blindfold terrorism suspects (many of whom turned to be innocent) and kidnap them without explanation. Only instead of occurring on the streets of Italy or the Middle East, it's happening in downtown Portland."