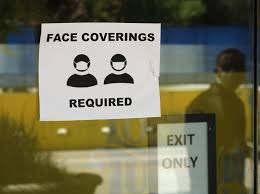 Unfortunately, but not surprisingly, Whitmer fails to provide any constitutional justification for such a mandate. I know it sounds quaint to a Democrat or, for that matter, to a Republican, to bring up the Constitution in the midst of a crisis, but it's important that we libertarians continue to call these people out when they endorse tyrannical measures, especially since it might dissuade them from endorsing even more.