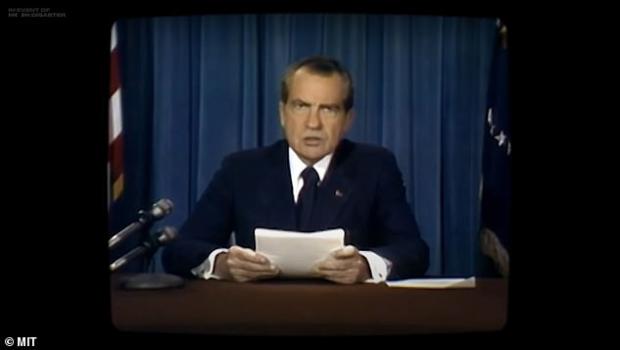 A scarily realistic deepfake video shows what it would have looked like if President Richard Nixon was forced to deliver a sombre address to the world had the Apollo 11 mission ended in disaster.

It is well-known that the American president had two speeches prepared, one in case of a safe landing and one in the event that tragedy struck.

Fortuitously, the landing on July 20 1969 by Neil Armstrong and Buzz Aldrin was a resounding success, rendering the latter redundant.

However, experts at Massachusetts Institute of Technology (MIT) have created an entirely artificial video showing what it may have looked and sounded like.

It is part of a project called 'Moon Disaster' and is designed to draw attention to the risk deepfakes pose and how they can manipulate people and spread fake news.

Deepfakes are forged videos that look realistic and have already created issues in the real-world.

Last year, a viral video of Nancy Pelosi slurring her words and appearing drunk circulated around social media. However, it was doctored and not a legitimate representation of a speech she did give.

While this was not technically a deepfake, it showed the power of disingenuous videos online.

Robot can detect if people are wearing masks