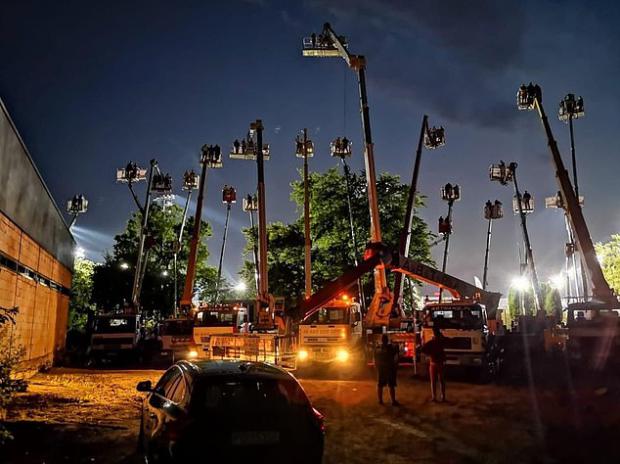 Fans have gone to desperate lengths to watch a popular speedway race by renting cranes to peer over into the stadium after social distancing guidelines prevented them from entering.

The supporters were spotted high above the Stadion ?u?lowy Motor Lublin in Poland on Sunday as they watched the national Speedway Extra League.

The stadium, which has a capacity of 13,000, is only allowed to fill 25 per cent of its seats during events amid the coronavirus pandemic - and so fans decided to take matters into their own hands.

The eager speedway enthusiasts stood on the cherry picker platforms in groups of two or three with the shortest at around 65 feet (20 metres) off the ground.

Many of them lit flares late into the night as they looked down on to the track from a similar height to that of the stadium's floodlights.

It was reported locally that in the first speedway event of the season there were only three cranes hired to overlook the stadium but this quickly escalated to nine at the next event and 21 after that, according to WP Sportowe Fakty.

The fan orchestrating the organisation of the cranes, Artur Bieniaszewski, told the publication he is still being inundated with more requests by fans.

Social distancing regulations in Poland are expected to alter again in August to allow the stadium to fill with 50 per cent capacity.

It is not yet known whether this will see an end to the use of cranes by speedway enthusiasts.