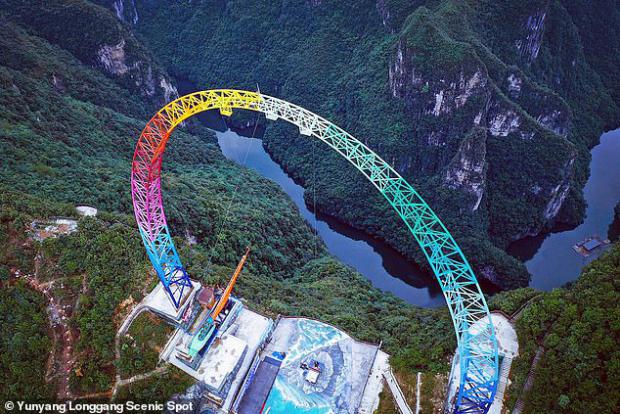 Footage shows thrill-seekers screaming as they were bound to a harness horizontally and flung out at a top speed of 80mph at its grand opening today.

The extreme ride is a whopping 328 feet tall, roughly the equivalent of a 30-storey building.

Billed as the 'king of all swings', the vertigo-inducing attraction is situated in south-western China's Chongqing.

It has been certified by the Guinness World Records as the 'tallest swing frame' on earth after beating the last recorder-holder, the B!g Rush located in South Africa, by 40 feet.

The Chinese swing can catapult tourists over the cliff at a top speed of 80 miles per hour, according to engineers at Yunyang Longgang Scenic Spot.

The terrifying ride was completed late last year and meant to open to the public early this year.

However, due to the coronavirus outbreak and the subsequent lockdown, the management had to delay the grand opening.

As a city known for its wacky architecture, Chongqing is already home to an enormous rocking chair which faces a 1,000-foot-tall cliff.