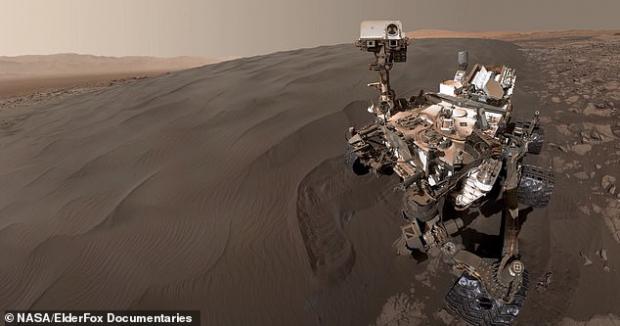 British YouTubers ElderFox Documentaries have taken thousands of pictures and converted them into ultra high definition for a 'world first' view of the Red Planet.

The team describe their documentary as 'the most lifelike experience of being on Mars' and since being uploaded on July 17 it has had over 2.3 million views.

They put the images together into a ten minute video that takes the viewer on a journey through the eyes of the NASA Spirit, Curiosity and Opportunity rovers.

The video opens with a narrator saying 'the images in this video are all real' telling viewers to 'sit back, relax and enjoy this journey across another world'.

There is no 'live footage' of the Red Planet from the NASA rovers but the team stitched thousands of images together to create panoramas that they panned across to create an effect similar to that of a live video.

All of the images are publicly available and shared by NASA on its website including a 1.8 billion pixel mosaic of the Martian surface.

This was taken from an area known as Glen Torridon and is made up of more than 1,000 images from Curiosity taken between November 24 and December 1, 2019.

Watch live: Virgin Galactic is unveiling the interior cabin of its SpaceShipTwo rocket...